We went. We visited. We came home.

We got the best hugs ever and spent much of the day just soaking up the feeling of being together again. It was hot and humid and so group activities where we could socialize and learn more about camp just seemed impossible – we strolled off in search of a breeze and found it on a hill overlooking the lake.

One look at his cabin made me feel so proud of our boy – living in close quarters in that heat (lots of fans) for so long would test the best of us. And of course this is no ordinary group of boys. They are quirky and sometimes challenging kids, and fortunately the counselors are young men with good hearts and lots of energy. It is clear that he copes by drawing  – the walls next to his bunk are plastered with art in which every part of the paper is colored. Our girl found a little note written on the wall next to his pillow: “6 weeks can take forever and all summer.” At that moment it was hard not to whisk him to the car and bring him home, until I asked him what he missed most. He looked wistfully away and sighed. “Wireless internet.” Okay, he can stay.

And the reality is that he showed us he has the tools to stick it out for another couple weeks, and do so happily. His knee is great, he is taller (I think), more muscular (for sure), and much more self sufficient. He swims twice a day and has learned to water ski. He got and wrote some terrific letters; there’s an impressive pile of them next to his bunk. I am overwhelmed at the generosity of all of the friends and family who make the effort to write to him and send him care packages. It is an unexpected blessing of this whole enterprise that so many people would take the time from summer work and travel to think of him – he got packages and postcards from Europe, Ohio and California representing family, friends and teachers he has known at every age all the way back to preschool.

Our world – his world – is bigger than we thought. That alone is worth the price of separation. 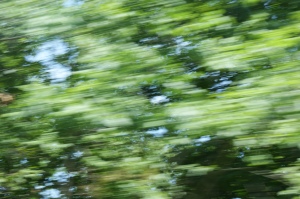 It’s just a dislocated knee from, to quote the boy, “too much dancing and jumping.” The camp nurse, MB, broke it to me slowly, which is good because I was driving when she called to say that his knee was injured and the ambulance was on its way. It was all I go do to stop myself from getting on the highway and driving west toward camp. It didn’t matter that it would probably all be taken care of by the time I got there – the thought of him in an Emergency Room without me sent my stomach through the floor. But I held it together and kept my sense of humor, laughing when she told me that, when they went move him he glowered and them and warned, “Don’t even think about it!” I’m sure there was plenty more of that before the night was out.

As our strange brand of luck would have it, he already had some ER experience under his belt. Thanks to an emergency appendectomy in 2007, he’d already been to an emergency room, already had pain killers, already had x-rays and an I.V. Some of those memories were traumatic – courtesy of an atrocious phlebotomist – but we had worked them through for the most part already. But in 2007 (five years ago to the day from this event, now that I look at the calendar) I never left his side for days at a time. Now all I had was a guy named Tom the EMT at the other end of a cell phone and a counselor named Liam with a fabulous British accent, both telling me that he was fine. I had gone from not trusting anyone with my kid to allowing two complete strangers to ride in an ambulance with him  (that part was new – I think he thought it was cool) and advocate for his care.  How this happened and why I didn’t drive through the night to get there I am still trying to figure out.

But I had no choice but to ask a lot of questions and hope they got the best care they could. The plan was to give him some pain killers, pop the errant knee back into place, take some more x-rays to assure that nothing else was wrong and send him tromping back to camp with a brace and a boatload of Motrin.

I spoke with him on the phone twice in the ER, and he sounded pretty good. At one point he said, “May I return now?”

“No, I mean come home.” No tears, no angst in his voice, just a simple question. I had to answer fast, since any hesitation would reveal my ambivalence and would be taken as an opening for negotiation. I wanted to say yes and so I can’t remember exactly what I did say, but I know I laughed and assured him that he would be fine among his friends at camp and added that we would be visiting soon anyway. I am so proud of his bravery in the face of all these transitions I could not possibly let him think that getting hurt was the way to come home. I have too many pictures of him smiling and it was too close to family day to let what appeared to be a recoverable injury undermine his summer, even if he didn’t quite see it that way.   No worries, I told him.

Damn the communication disorder. We agreed on early morning phone calls because we wanted the call to be as far away from bedtime as possible to avoid homesickness, which is more likely to strike at the end of the day. But now he comes to the telephone sleepy and hungry, ready for breakfast instead of conversation. Sweet and groggy, he gives maddeningly short answers.

Are you having fun? “Yeah.”

What do you think of camp? “Awesome!”

I know these are good and encouraging answers, but I want details. Reassurances. Stories. Questions about how things are at home. I remind myself that I, too, am monosyllabic at 8am. More importantly, this isn’t any different from the conversations we have over the phone when he is here. I know that he is looking at his counselor as he speaks, waiting for prompts, and that the short answers mean that he is not getting prompts because they know I will hear it if they model answers for him. I also know that if he really wanted something, he would tell me. All of that is good, but at the halfway point of a 7 week separation I can’t help but want more. I am being unreasonable.

So the voice, with a trace of sleep in it and a smile behind it that I can detect, will have to suffice. And I blog about because as I write it down it gets more encouraging in the retelling.

What are doing today? “Having breakfast.”

What’s for breakfast? “I have no idea.”

What do you want for breakfast? “Pancakes.”

What do you think of camp? “I’ve been here a lot of weeks!”

We are coming to see you on family day! “Good!”

We will all give lots of hugs. “Yeah.” <heavy sigh>

We can’t really ask for more than that.

But a letter would be nice…