We are movie people. When our kids were small they didn’t have special showings for kids and people with autism like they do now. I think it’s great that they do, but we’ve kind of developed own set of tools and rituals that get us through the movie experience. For many years our boy spent every movie happily on my lap, with my arms wrapped around him and his hands firmly over his ears. That was how he managed the sensory overload of a loud movie. When he moved to his own seat he would do one of two things (after eating exactly half of his popcorn and giving the rest to Dad), lay his coat on the armrests and go to sleep half leaning on me and resting on the coat, or put his head on my shoulder and have me put my hands over his ears while he watched. I am in awe his use of sleep as a coping mechanism when he is overwhelmed or distinterested. How many people do you know who can sleep soundly – snore, even – through The Avengers, Thor, Iron Man 2, and 8 innings of a Red Sox Game at Fenway Park?

It’s been a lackluster winter for family movies (with the notable exceptions of Life of Pi and Lincoln, both of which he sat through, riveted and perfect) so we haven’t been in months. Finally, cabin fever drove us out of the house to see Jack the Giant Slayer and this time the boy and I found ourselves watching shoulder to shoulder as I waited for him to lean over and nod off as the beanstalk wound its way into the sky. But the lovely girl and the prospect of romance kept him awake this time, and he kept whispering to me “Do you think Jack will marry the princess? Are they in love? Are they going to get married? Will her father the king approve?” Usually the only questions I get are whether this is a short, medium or long movie, so the specific plot questions and the arm tapping and hand squeezing and his turning my head to look at him when he spoke to me were all new in this setting, and most welcome (but his brother did move one seat down). 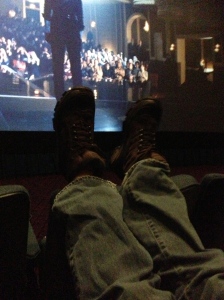 If you sit in the front you can put your feet up and no one cares.

But the best part was when the grotesque giants made their first appearance and I instinctively raised my hand to cover his eyes and at the exact same moment he did the same, covering my eyes with his hand. There we were, side by side, with our hands clapped firmly over each other’s eyes, trying to keep each other from being scared. He knew it was funny, too, even as he kept his hand firmly in place until we agreed that we could look at the screen again.

I know it’s a milestone, whatever just happened there. It’s a new level of reciprocity and sophistication, a point at which he now wants to take care of me the way I try to take care of him. It’s what we wanted and worked for but not necessarily what I expected to happen, because at some point expectations get to be counter productive when you are raising kids, whether they are typical, autistic, or anything else. Goals are essential, but expectations just get in the way of seeing and responding to what is right in front of you, and if you are lucky someone will put their hand over your eyes during the scary parts.

All content ©LettersHead 2021. Unauthorized use and/or duplication of this material without express and written permission from this blog’s author and/or owner is strictly prohibited. Excerpts and links may be used, provided that full and clear credit is given to LettersHead with appropriate and specific direction to the original content.