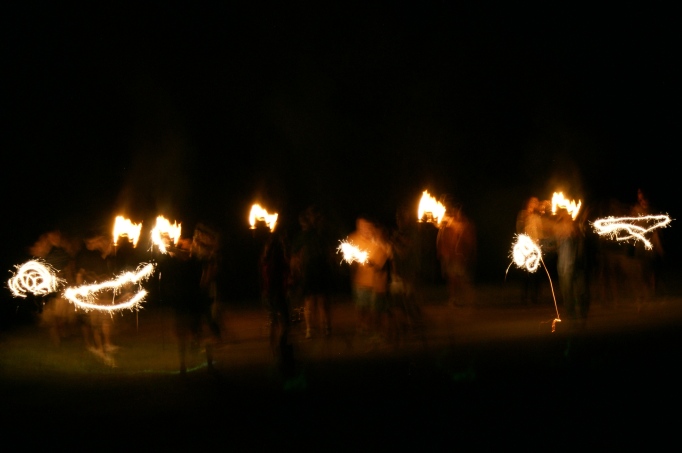 A parade of sparklers from last summer, about a thousand years ago.

I think it is me who is regressing this January. We did a lot, learned a lot, and worried a lot in 2012. I am wiser but much less brave than I was a year ago, having gone from sending our boy away to camp for a whole summer to being reluctant to send him to school for even a day. Sickness and Sandy Hook (not to mention a totally dysfunctional Federal government) make me think we are more vulnerable than ever and while we have a plan (as of yesterday) to get him healthier I haven’t the slightest clue how to rebuild our confidence. We were always wary of the outside world; now the outside world is wary of us. When we ventured out over the holiday season I noticed that I stopped using the word “autistic” to explain odd behaviors – in fact I avoided saying anything at all to anyone about him, and made more of an effort to avoid eye contact. I am ashamed that I want to be invisible, angry that people are spreading ignorance and fear about autism and appalled that I have allowed it to affect my behavior. Still, we go out a lot and, like many parents these days, we do our best to show and tell our children how much we love them. And, quite literally, we hang onto them a little tighter than we used to.