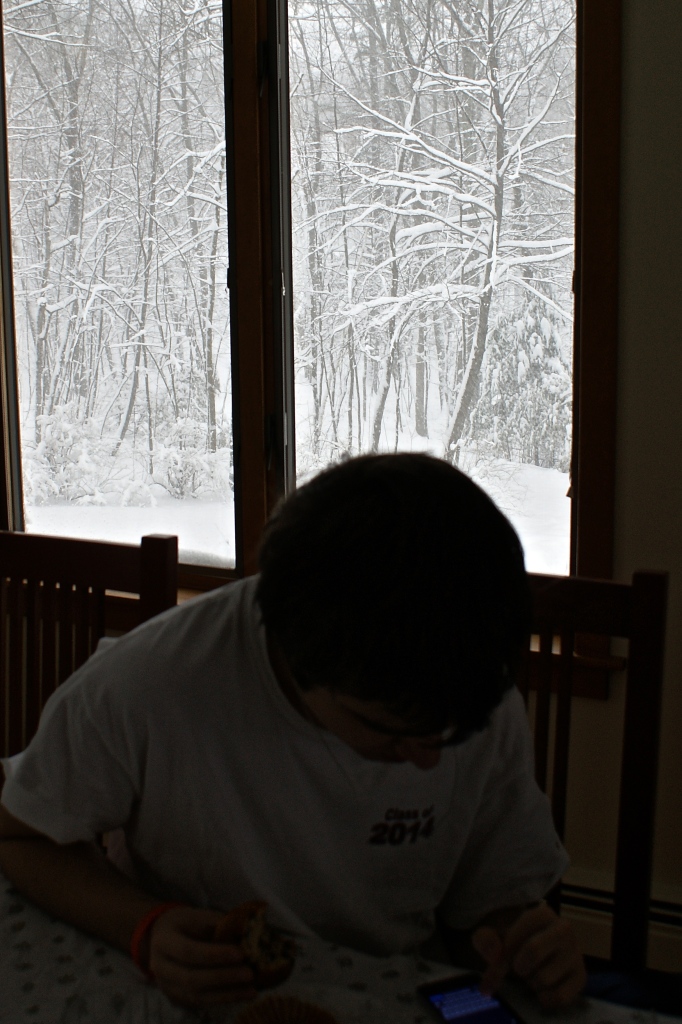 I love the quiet of a house buried in snow. Skylights are blanketed so it’s a little cave-like and the only light is what comes in from the blizzard outside. And because it’s March there is a bit of warmth to the white, and the assurance that it will all begin melting tomorrow. The bitterness of winter is gone, in ways I cannot begin to explain right now (it is a snow day after all – we have some serious laying around to do). The boys are happy, and when Dad and daughter arrive later everyone will be home and “tucked up tight.” Those small phrases pop into my vernacular all the time (scripted speech? Probably).

The older the children get, the more we seem to quote the books we read to them when they were small. Perhaps this one most of all: A Story A Story – let it come, let it go.

Hurricane Sandy may have passed, but clouds remain on our horizon. I’m not yet ready to post about our boy’s ordeal over the past couple of weeks, but as we stumble through the second day of weather-related school cancellations I see a furrowed brow and a short temper that prompts me to warn my younger son to cut his older brother a wide berth. Other families face much greater challenges from aggression than we, but I am so conflict-averse that even the rough and tumble of typical adolescent boys sets me on edge. We are all off kilter from too much TV storm coverage and howling wind and pouring rain, followed now by creepy cloudy silence and listless lack of routine. We know we are fortunate to have the power on and the trees intact – it wasn’t our turn this time but who knows what the winter will bring now that we have used two of our snow days.

We read on Facebook about some families taking delight in the drama of storm prep and others – the ones with kids on the spectrum – wary of how no power or school might unsettle their kids. We are somewhere between. My boy slept in the basement last night to protect his trains and animals from the perceived threat of the storm – his strong protective instincts run from cutting trees with Dad to carefully tending to his stuff: the Thomas trains stored in their sheds and Playmobil animals in the barns – even the portable DVD player that is the Sodor Drive-in theatre tucked safely away. Camping on the couch in his sleeping bag is part of what makes him such a beast today even though he came upstairs at dawn and finished his rest in our bed after Dad went to work, his feet looking for mine while he fidgeted in his sleep.

And as I write I hear the boys talk in warm tones and the sun emerges to cast a brighter, wintry light on wet fallen leaves and bare branches. The clouds are expected to come and go with maybe one more wallop of rain from the backside of the storm. We’ll proceed cautiously through today and look forward to the routine of tomorrow – which, I now realize, is Halloween. Oh boy. 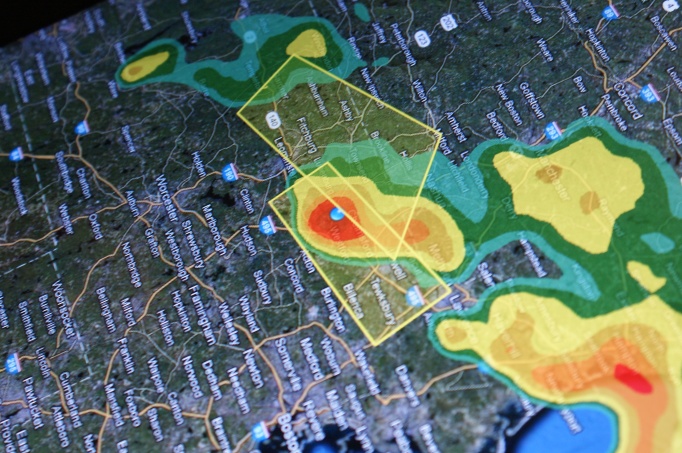 The blue dot is our house at midnight last night, complete with chick pea sized hail and forked lightning.  There are moments, during fine weather, when this is exactly what it feels like inside our house.  Thanks for the visual cue, Mother Nature.

Error: Twitter did not respond. Please wait a few minutes and refresh this page.